New Berlin, NY – The summer break has come to an end and we are back in full swing with GNCC racing.  I can’t think of a better track to kick off the fall racing action than “The Dilla”!  The Unadilla Valley Sports Center is home to a world famous motocross track that features such obstacles as “The Sky Shot” and “The Gravity Cavity”.  Combine that with the black loamy soil and wide open trails, you have a recipe for a rough yet extremely fast paced XC race.  This track has a reputation of attracting a large number of riders and this year was no exception.  361 racers signed on the dotted line for the morning quad race along with 218 brave souls in the afternoon.  Add to that the huge number of Sunday bike racers that showed up early, the hardy New Yorkers who heard there was a party, and you have one exciting day of racing.  Unfortunately, it was an exciting day of racing that many SBR riders had to miss out on this year.  Injuries and prior commitments kept 5 of our 8 riders away but I hear they were glued to gncclive.com throughout the day.

We’ll kick off pumpkin season with a young man whose positive attitude and ability to take things in stride still astounds me every time I talk to him.  Sport 15+ rider, Colton White, began the race just as strong as ever.  Disappearing into the woods bar to bar with the top riders in his class, Colton completed lap one in 1st place holding a 14 second lead.  Somewhere on lap 2, mechanical issues kept him from holding on to that lead.  Starting with a clutch problem and ending with a broken choke in the carburetor, Colton’s quad just refused to cooperate.  He continued to fight even though he dropped to the 9th position on lap two and the 11th position on lap three.  On lap four he made the decision to call it a day, a decision that every racer despises but the smart ones know will save the quad in the long run.  Ending the day in the 13th position, Colton still holds on to his 1st place points lead but he knows the gap is closing and that he still has work to do.

Next we move back two rows to the 35+c class where Cliff Vowell sat with 17 other riders waiting for the flag to drop.  After some handshaking and catching up with people I haven’t seen in two months, it was time to get down to business.  The holeshot was again a success until the first turn fumbles caused me to stall the quad again!!  Call it nerves, call it lack of training, call it what you want, it’s annoying!!  There is nothing else to do but lock myself in a pasture and practice turns until I need new tires.  Once I recovered from that incident, I managed to hold on to the 11th place position the entire race with one small stint in 12th.  My goals for the remainder of the season are to continue to improve my riding and training, as well as fight to hold on to my 3rd place position in points. 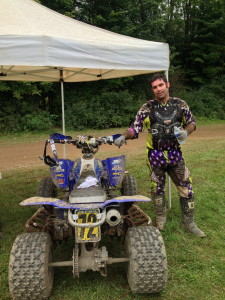 Last but not least, we have SBR’s only afternoon rider for the day.  Vet B rider, Dan Webb, began his journey on a high note entering the woods at solid pace, doing battle with 24 others in the class.  Early on he felt things were looking good after making a few key passes, but by lap two he admits that this race just wasn’t going his way.  Still fighting a cold coupled with a nasty bout of arm pump, the strain that XC racing creates was taking its toll.  Throughout all of the physical stress, Dan still managed to complete an astonishing five laps landing a 12th place for the day.  I think its vitamin C and rest for the next two weeks.

Well, that just about does it for the 2013 Can-Am Unadilla race.  It certainly wasn’t the most impressive showing from Team Slightly Bent, but sometimes it just “is what it is”.  As we ramp up our training, recover from illnesses, and fix what’s broken, we look forward to a brand new venue on the circuit.  “The Gusher” in Foxburg, PA is new for 2013 and should prove to be an exciting race.  I mean, anyone who has ever raced in Pennsylvania can tell you, be prepared for a challenge!  Lastly, over the summer break we launched a new website, www.slightlybentracing.com, with the help of PitTraffic.com.  The site includes rider bios, race reports, press releases, and you will soon be able to find some technical blogs, product reviews, and other news from SBR.  You can also find links to the SBR SmugMug site, YouTube channel, Facebook, Twitter, and Instagram pages.  It’s a lot for an amateur team, but hey, go big or go home!!  See you in two weeks!!