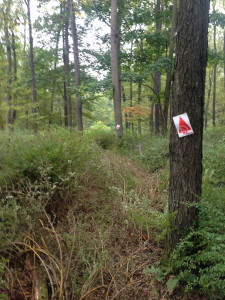 Fresh trails. Not for long!!

Foxburg, PA – Any racer who owns stock in a pressure washer manufacturing company came out on top at this past weekend’s race.  Held on the 1200+ acre property of the Riverstone Estate, the inaugural Car Mate Gusher has secured its spot in GNCC history.  Arriving early Friday morning amidst rumors of incoming rain, we set up shop along a fence line close to the exit with the hopes of escaping the majority of the mud.  Yeah right!  This property has never been ridden before, let alone raced, so about 80% of the trails were fresh leaving the other 20% for a few small field sections and some old logging roads.  About an hour before the start of the morning race, we took a look at the radar to get a sense of where the rain was and all we saw was a green wall headed right for the track.  The morning ATV classes took off just as that wall arrived and the rain didn’t let up for the next 6 hours making The Gusher one of the muddiest tracks we’ve seen, right up there with this year’s Mammoth and the Ironman of 2012.

The first rider to start his swim was our own Colton White.  Coming off of a string of bad luck and mechanical problems, Colton sat quietly on the line of the Sport 15+ class in the rain waiting for his chance to turn his luck around.  And turn it around he did, taking 1st place in the class and an astonishing 12th overall out of 267 riders.  At this point it looks like Colton is going to be in a tight points battle for the class championship and it’s probably going to come down to these last two races.  As quiet and laid back as Colton is I’m sure he already has his sights set on the work he needs to put in at Powerline Park.  My dad used to say, “The guy that doesn’t say word is the one you have to worry about.”

Only two rows back and under a giant umbrella sat 35+C rider, Cliff Vowell.  As the umbrella was lifted and the green flag dropped, 11 riders slid through the corners in a frantic attempt to enter the woods first.  Arriving 4th in line, the mud immediately started slowing things down as I watched riders 2 and 3 slide sideways in the track allowing me to make an early pass.  With a seemingly wide open trail ahead of me, I yanked the roll off string a few times and hammered down.  The 2nd place glory lasted for about 20 minutes when an otherwise fine choice in lines turned into a mud bog you usually only find at a county fair.  Two hours later and what seemed to be 200 pounds heavier, I slid through the finish line in the 7th position just happy to have finished at all! 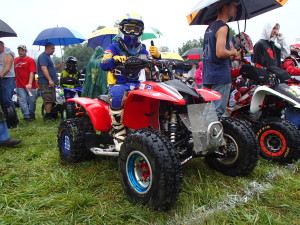 With the rain now in full swing, we high step our way back to the holeshot for the afternoon race and Vet B rider, Dan Webb.  Despite the wet grass, Dan shifted his weight back and took off from the line like a man on a mission.  As he entered the woods, he was quickly greeted with some of the worst conditions an XC rider can face.  The morning race had graciously left these riders with deep ruts, soupy mud, and exposed roots.  Back at the pit we armed ourselves with fresh supplies waiting for Dan to come in, but he never arrived.  Then, 50 minutes later he came in explaining how he had been fighting the quad, in what felt like quicksand, until a fellow racer stopped to help.  Frustrated and sitting in the 13th position, Dan wiped his face, took fresh goggles, and went back to work.  After a grueling 2 hours and 43 minutes on the track, Dan clawed his way back into 8th place for the day.

Despite the harsh conditions, this race was a very exciting milestone for our friends at Vigilant Vet Racing.  VVR rider, Brandon Rumbaugh, entered his specially adapted quad into his first ever GNCC race.  Despite all of the adversity that lay before him on that track, Brandon did what every Marine does and took it head on and now proudly suffers from the same racing bug the rest of us do.  This organization has accomplished some amazing things in less than a year’s time and is only getting stronger.  Check them out at www.vigilantvetracing.com to see how you can help.

That does it for SBR from The Gusher.  We’ve managed to slide through everything from banners, to fences, to ez-ups, and we are very thankful to the Riverstone Estate property owners for allowing us to do so.  I think I speak for the team when I say that this new venue gets the green stamp of approval and we hope to see you next year!  In the meantime, 8 straight hours of pressure washing didn’t quite clean everything, so back to work.  Don’t forget to check out our website at www.slightlybentracing.com and follow us on Facebook, Twitter, and Instagram.  See you at Powerline! 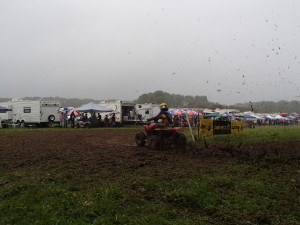 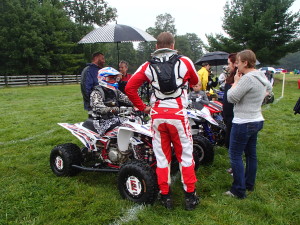 Vigilant Vet Racing rider, Brandon Rumbaugh prior to the start. 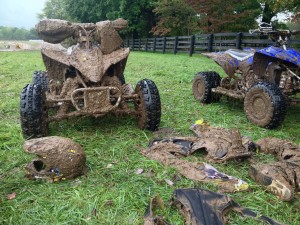 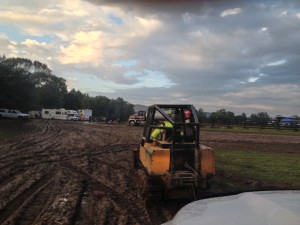 One way in, and one way out.