Millfield, Ohio-   Round 7 of the GNCC series brought us to an oldie but goodie, the Wiseco John Penton at Sunday Creek Raceway.  This track is known for its weather so we came prepared for either extreme dust or extreme mud!  Luckily we escaped with just a small amount of each which made for some great track conditions.  Mother Nature did throw in some heat for us this year but that didn’t stop Barry Hawk and the GNCC track crew from laying out a fantastic course.  This track has it all, tight woods, creek beds, open fields, elevation changes, and of course the new hill climb located just a few feet after exiting the motocross track.  The only challenge missing are the rocks, which the riders may miss, but the mechanics sure don’t!

Starting off in the morning race is Sport 15+ rider Colton White.  Despite encountering some mechanical issues, Colton finished 4 laps, and wound up in 7Th place for the day.  The talent this young man possesses is extraordinary and he continues to put it on display at every race.  Still sitting on top of his class in points is bound to be a strong motivator for the upcoming West Virginia race, so don’t look away just yet.

Cliff coming off of the motocross track.

Way in the back, sat the 35+C class with Jason Gautier and Cliff Vowell.  A solid holeshot sent both of us into the woods together, but after a few miles, a bottleneck on the track, coupled with quick thinking, put Jason in the 3rd position on the first lap.  He held that position until an electrical problem ended his day about 2 miles into the second lap landing him a 10th place finish.  As any racer will tell you, happening upon a rider who wears the same class sticker on the back of their helmet is like a red cape to a bull.  This scenario sparked one of the most heated battles I’ve ever been in.  After trading places for the better part of 8 miles, I finally ended up on the motocross track with the checkered flag in sight.  After the dust cleared, I ended up in 5th place, a mere 1 second behind 4th and only 6 seconds behind 3rd.  That made for a pretty good day.

The afternoon Senior A/B class saw the return of Rusty Repass to the line.  Excited to be back, Rusty took off without a hitch and entered the woods.  After just a few miles, Rusty’s quad began to sputter.  “I couldn’t get from here to that trailer without it quitting on me” said Rusty.  After limping back to the pit, Rusty made the decision to call it a day and go back to the drawing board.

Dan Webb ended his day with an 11th place finish in the Vet B class.  After using up every drop of water in his hydration pack, Dan returned to the pits showing some very consistent lap times.  Laps 2, 3, and 4, were all within seconds of each other.  Continuing to build on that consistency is what’s going to land him a top 5 finish at the end of the season. 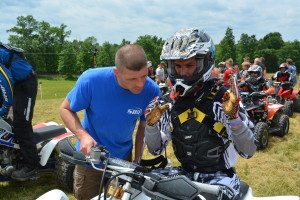 Jason and Rusty preparing for the holeshot.

Last but certainly not least, is 30+C  rider, Josh Riley.  If you were paying attention, you’ll know that two weeks ago Josh hit a rogue stump in Indiana and injured his thumb.  Well, that injury is just a little worse than we thought.  As it stands, Josh will be out for at least four weeks, if not longer, depending on how the healing process goes.  Unable to race, Josh and Slightly Bent team member, Troy Phelps, made their way to Ohio anyway to show their support.  When you look up dedication in the dictionary, you’ll find a picture of those two.

That just about wraps it up for now.  In two weeks you will find us in Jason’s home state of West Virginia for the Parts Unlimited Mountaineer Run.  Since we haven’t managed to bend anything on the trailer yet, come see us this Saturday ,June 8th, at Great Meadow in The Plains, Virginia for the 2nd annual Tribute to Wounded Warriors.  We’ve teamed up with Rick Proctor and Vigilant Vet Racing to help raise awareness for PTSD.  Quads, riding gear, and safety equipment will all be on display along with race series information and a host of resources for Veterans.  Check out Slightly Bent Racing and Vigilant Vet Racing on Facebook for more info. 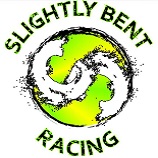