Union, SC ~ Round 4 of the Grand National Cross Country Series takes us south to one of the oldest and most popular tracks on the circuit, the VP Racing Fuels Big Buck located on the beautiful open acreage of the Big Buck Farm.  Since most of the team was glued to their weather apps all week after Steele Creek, we came to the conclusion that this was going to be a great weekend of racing!  The track crew did an excellent job with the course layout this year.  Sometimes when a venue has been on schedule for as long as the Big Buck has you end up running out of fresh ideas, but that just wasn’t the case this year.  All said and done I would describe this course as fast!! 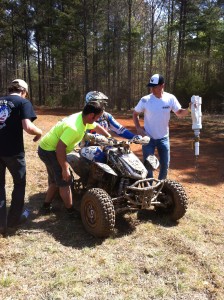 Kicking off the morning race was the #414 of Colton White on his Combs Powersports backed Honda.  After not even making it off the line at Steele Creek, Colton had some catching up to do and that is exactly what he did.  Colton took the holeshot and lead the Sport 15+ class the entire race to end his day with a 1st place with an astonishing 8th place overall.  Moving along we have our lone Suzuki rider Daniel Gwinn in the 16-18C class.  Daniel remained vigilant as he and the other top 5 riders battled it out for the first 3 laps until he made a bad line choice on the final lap that sent him back to 10th place for the day.  Some people would let a decision like that ruin their day, but Daniel came back to the pit, admitted his mistake, and is already looking forward to Indiana.  35+C rider Jason Gautier had a few mechanical issues in his first 2 rounds but arrived in South Carolina ready to work.  Ending his day with an 8th place, Jason has shown solid improvement so far this season and has his sights set upward.  Wrapping up the morning classes is the #920 of Donnie Pruett and the Silver Masters 55+ class.  Donnie stretched his legs and gave his Axis shocks a workout by finishing 2nd, mere seconds behind the top rider.

Fast forward the clock to 1 P.M. and we find Senior A/B rider Rusty Repass lining up on his Houser Racing backed Honda.  Those who know Rusty know how competitive he is and how leading his class for 3 laps but making a mistake on the final lap hurts him.  4th place on the day is not quite what he was hoping for, but he’ll take it, clean his gear, and move to the next one.  The #703 of Dan Webb put on a solid performance in the Vet B class by taking home a 7th place finish.  Dan has been putting in some extra seat time this season by attending some local series races so keep an eye out for him.  Fellow Vet B rider Cliff Vowell ended his day in the 12th position.  After being sick the entire week leading up to the race, I am perfectly satisfied with those results since I considered sitting this one out.  We knew that wouldn’t work!

We want to take a moment to remember someone who had become an integral part of our race program.  On their way to the Big Buck event, GT Thunder owner Lazarus Sommers and his wife Mary Ann were killed when the small plane he was piloting crashed in the mountains of West Virginia.  The overall feeling at the start line Saturday morning was one of disbelief and shock.  You could see the sadness in the eyes of not only the racers, but the crews, the officials, and the entire racing community.  Laz was a true pioneer in XC racing and his influence can be seen from the professional level all the way down to the grassroots racer.  Despite this incredible loss, over 350 riders strapped on their helmets, filled their hydration packs, and set out to honor our friends the only way we knew how………we went racing!  Godspeed Laz and Mary Ann.