Snowshoe, WV- WOW!! I’m not sure where to begin explaining the insanity that was the 2013 AMSOIL Snowshoe GNCC. It was created to pay tribute to the race that started it all, The Blackwater 100, but the Snowshoe GNCC has become legendary in its own right. Held almost 5,000 feet above sea level at the famed Snowshoe Mountain Resort, this race is not for the faint of heart. Just under 500 quad riders signed up to tackle the unforgiving rocks, thick mud, tree roots, and of course, the steep ski slopes. The afternoon riders even had rain storm thrown in. The unique live engine start rolling through the middle of town will most certainly get the adrenaline pumping, and it’s true what they say, “You won’t win the race in the first turn, but you can lose it!!” For those racers who finished and are now back at home, work, or school, attempting to describe their experience to other people, give it up!!!! A race like this has to be seen to be believed, but trust me there are hundreds of us wearing the same “You have no idea!!” smile on our faces today. 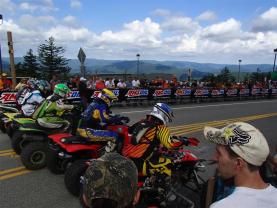 Colton waiting for the flag to drop.

We’re going to begin with the current points leader in the Sport 15+ class, Colton White, who put on yet another stellar performance at this years’ Snowshoe race. Colton completed an astounding 5 laps managing to hold onto 2nd place the entire race. Pulling into the pit less than a minute before the finish line to down a bottle of water was proof that he once again left everything he had on the side of that mountain. Although we have reached the summer break in GNCC racing, don’t look for Colton to spend too much time at the pool. Guys like him have race gas running through their veins, so look for the green Slightly Bent stamp the next time you’re at the track.

On to the 35+C class we find Jason Gautier and Cliff Vowell now locked in a points battle for 4th and 5th. Jason started off running like a man on a mission until his chain came off on the first lap giving me the opportunity to catch up and make the pass. After making a few mistakes and feeling like the mountain was getting the better of me, it happened again!! Jason obviously had enough of the mechanical issues that have plagued him all season and passed me as if I were sitting still. This spawned an all or nothing battle that would see us sliding into the pit for fuel at the same time. As our pit crew handled this awkward situation with speed and accuracy, I popped the clutch and sped away as if my life depended on it. Mere seconds behind, Jason reappeared to my right as we crossed off another lap and headed down a very long stretch of ski area. With both quads in 4th gear and pinned to the rev limiter, we felt a racing speed that was certainly on the edge of out of control!! Unfortunately, a last minute mistake in the mud hole, forced me to take the checkered flag and allowed Jason a 5th lap to continue fighting. However, it was on this 5th lap where the mountain fought back and won. Jason overshot a sharp turn sending him and the quad sailing over an embankment. Don’t worry, Jason is fine but we can’t say the same for the quad. Bent frame, bent steering, and a host of other damage. Finishing his day in 8th and mine in 10th, we head into the break with our heads held high and of course, parts on order!

After a quick shower and a sandwich, we head back to the village to cheer on our afternoon riders. Vet B rider, Dan Webb, started this race with the same strength he has started with all season. When you race in a class as competitive as his, every second counts and every little mistake is costly. “It’s hard not to have fun at Snowshoe, but I kept making little mistakes that forced me to get off the quad to correct!” said Dan. Finishing 8th for the day, Dan is looking forward to Unadilla in September by recommitting himself to a strict training regiment. Also, many of you may not know that Dan has been documenting most of the races this season using a special chin mounted GoPro camera. Keep an eye out for the Slightly Bent Racing channel on YouTube for this unique perspective of XC racing. Coming off of a list of mechanical issues himself, Senior A/B rider Rusty Repass, arrived on the mountain with one thing on his mind, finish the race!!! And finish he did, landing 2nd place on a quad that performed flawlessly. After holding that second place spot the entire race, he arrived back to the pits carrying not only a sense of relief that his quad was in one piece, but also a feeling that he’s back!! We’re looking forward to watching Rusty perform his magic in two months. 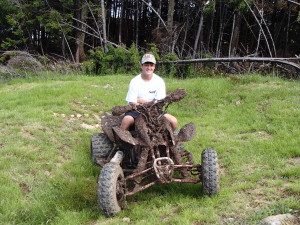 Welcome the the team, Andrew!

We want to take this opportunity to welcome Andrew Donahue to the Slightly Bent Racing family. Andrew hails from China Grove, North Carolina and has been riding quads since he was 6 years old. After a chance run in with our own Rusty Repass, he decided to give racing a shot and is currently running 2nd in points with his local Mideast Harescramble series. Andrew finished this race 17th in his class but starting to train and ride with last years’ Senior B champion is certain to put him on the fast track to success. One of his biggest goals is to race for a championship in the 2014 GNCC season and every member of our team will give 100% to help him achieve his goal.

Before I find an A/C unit to stand in front of, I have two more things to add. Great news regarding our 30+C rider, Josh Riley!! His thumb injury his healing quite nicely and doesn’t require surgery. Josh is working hard and if all goes well, he will be in attendance at Unadilla. Lastly, I want to give a shout out to one of the most dedicated race fans I know. Colton Whites grandfather, Mark Pitts, arrived at our pit Saturday morning before the youth race took off. Armed with a walking stick and a backpack containing water and his lunch, Mark proceeded to hike down the ski slope to the infamous mudhole where he stayed pointing out lines to racers all day! He didn’t reappear until long after the PM race was finished. Next time you come up to an obstacle you’re unsure of, look for the neon SBR shirt and he’ll point you through it. Have a great summer and see you at “The Dilla”!! 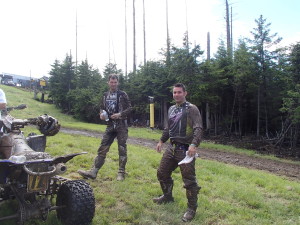 Dan and Rusty in the midst of storytelling. 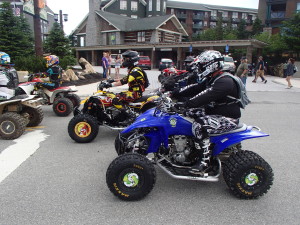 Jason and Cliff rolling to the line.